So today at church, we sat right behind a large family, which isn’t that rare since:
a) the average family size at our parish is probably about 6.5 and
b) all the families with children under the age of 10 choose to sit in the “cry room” or the very back of the church (where we were).
I had to count several times as it seemed the kids were playing musical chairs before the mass actually started but there was a bunch. I got to five and though “ah, how cute”, then another head popped up who must have been playing on the floor and I could barely see the hair from the top of the bench in front of me. Six. I thought “wow! That’s cool” Then a few minutes later, mom came from the “cry room” with numero siete as the others scrunched in with beaming smiles. That’s right, Seven offspring. This time I found myself thinking “Hmmmm” (quite curious how the next hour-ish would play out) I sat in awe with my jaw dropped as the dad kept 4 kids under the age of 10 in check. The fifth and sixth were older and self sufficient in terms of sitting still and helping mom and the seventh was in her arms. No joke, this man looked like a baseball coach flashing his own sort of different signals with a few fingers to correct posture, signal time for kneeling, keeping eyes forward, hands in lap or folded, etc etc. it was hilarious and like I said, I stared and stared and stared in utter admiration. I found myself smiling from ear to ear as the boy directly in front of me would trade off between tickling his sister and pinching her. Then again as the 2nd oldest girl (there were 3 in all) was holding the youngest girl (about 5) in her lap like a natural mom, caressing her hair and yet again as four of the children literally fought with their dad with purely facial expressions (this was all done in silence, mind you) to hold their baby brother, nudging him with they got impatient and wanted a turn. The pure, unconditional, joyful L O V E that these children exuded for their siblings was beautiful! You could almost feel it oozing out & seeping into our pew.
Before I knew it, it was the liturgy of the Eucharist and I realized I had completely missed the readings, not to mention the homily. Oops! Big self-realization and lesson to myself that I need to work on my discipline and that I am weak in the area of focus despite surrounding “distractions” (although these kids were extremely well behaved and the parents had total control of the situation, hence my obsession). Anyway, after the final prayer and closing song, I tapped the father on the shoulder and complimented his authority, leadership and said he would make a great 1st base baseball coach. The mom was quick to apologize assuming they were a distraction to me, which was only the case because of my particular curiosity for large families. We joked and introduced ourselves and then found ourselves talking again outside in more detail as kids ran past us in every direction squealing and laughing. I asked a lot of questions from ages to his job which provided for the needs of the clan to how you cargo nine people around at one time! (I’m telling you, I was fascinated!) I reiterated how impressed I was by the children’s behavior (maybe it was just their “Sunday best”) and the last thing I asked was “you don’t by chance home-school, do you?” He smirked and said “yeah, I’m afraid that’s the secret.” We joked some more about the common stereotypes people (including myself) had (the guy was funny) & said goodbye…A thought-provoking trip to church in a very simple yet unexpected way…I thanked God for the opportunity to meet a family who was proudly going against the tide of today’s culture and giving us some food for thought (not to mention great discussion between the spousal unit). I wish I had a picture of those kids with their varying shades of blue eyes (they were cuuute) but instead, these shots of a homeschooling proponent with his look alike baby will have to suffice… 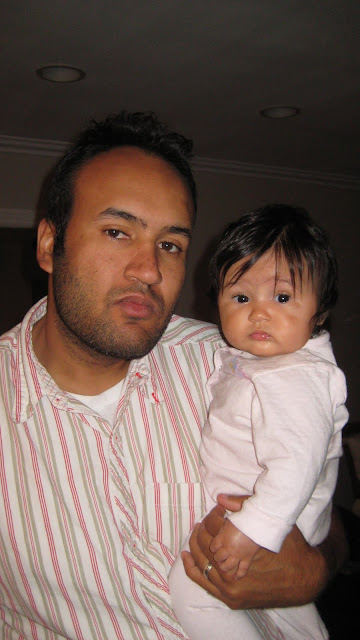 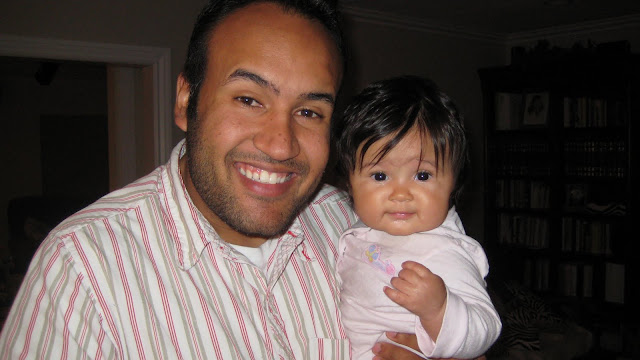