Well, this is definitely baby book worthy. So yesterday was a pretty mellow day, getting stuff done around the house and physically recouping from an emotionally exciting yet exhausting day prior. I felt like I could sleep for hours and hours and well, someone else did too! Little G went down for what I thought what a nap around 4pm. She usually gets at least 1 more feeding for the night. Well, when 11pm came around, then midnight, daddy and I started discussing possible scenarios we I would face for the next 6 hours. He strongly suggested waking her up to feed her in hopes of giving me some uninterrupted sleep until the morning. I was on board until I entered her room, looked down in her crib and saw the most peaceful, still, comfortable sleeping baby. I just couldn’t do it and told him I was prepared to wake at any moment of the night that she needed me. Well, that wasn’t until 6 this morning you got that right…fourteen, as in 1-4 hours of continuous sleep…One would expect me to be fully rested after taking advantage of a parent’s dream but of course, it was one of the worst nights of sleep I’ve had after checking on her several times during the night (the $200+ color video monitor just wasn’t good enough), once after being awakened by a nightmare, not to mention doing everything shy of putting a mirror underneath her nostrils to make sure she was still breathing! I wondered if she might be sick, this just couldn’t be right, after all, her 2 ½ year old sister has never done even close to that, let alone STILL doesn’t sleep through the night! Like a paranoid good mom, I called the pediatrician in the morning, searched online and made sure she was her normal, alert, responsive self. As you can see, she is definitely active and happy, we’ve just got one growing little girl!
The proof: this outfit is size 6 months! In fact, you have outgrown many of your 3 month clothes, all of your 0-3 and you’re not even 12 weeks old! 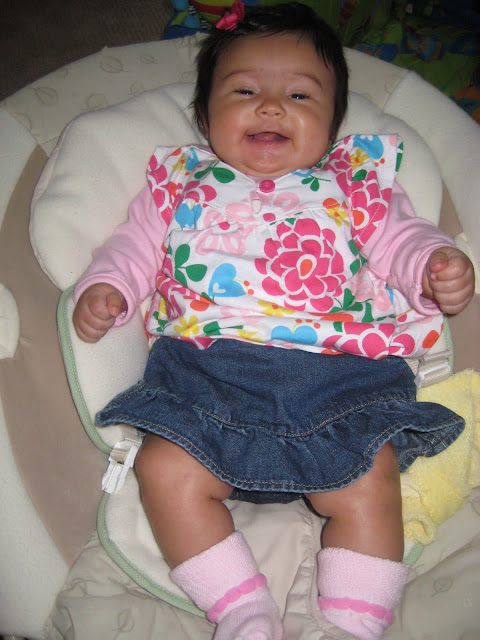 watch out Spicy A!
You better think long & hard about this one because sweet G is slightly bigger than you were at this age. 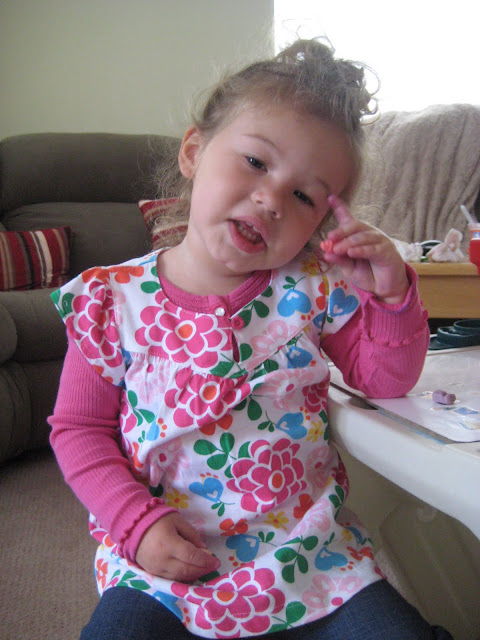 (and yes, this is the first of MANY matching outfits to be modeled. I always told myself when I was a wee youngster if I had daughters someday, I would never embarrass them like my mom did to us….well, I’m eating my words now and they’re rather spicy & sweet! At least I’m not doing the pigtail braids with loops – remember those sissies? ha!)